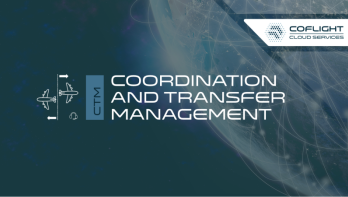 This Service is part of Coflight Cloud Services (CCS), which are primarily designed to support the Virtual Centre concept. As such, these CCS Services support the interactions between the CCS ATM Data Service Provider (ADSP) and Virtual Centre Air Traffic Service Units (ATSUs). The CCS CoordinationAndTransferManagement service is consistent with the other CCS services. It addresses the CWP manual interactions for managing Coordination and Transfer operations, and is to be used for automatic coordination of standard conditions as well as for manual coordination of non-standard conditions. This version of the service is intended to be used in 'test mission', which aims at providing services and support to the Customer(s) to enable them to test any version of their ATM system during development. Note: Only civil flights are handled by CCS services. Please note that the use of CCS CoordinationAndTransferManagement service implies the use of CCS FlightDataDistribution Service to get the output coordination and transfer information, i.e.:

- On-going Change proposals for those coordination and transfer

For Incidents on services in operation, contact the Service desk [working hours/opening days] as described in the related support service (incident management) supplied by CCS provider to CCS customer during the procurement phase